In the Old Patagonian Express, Paul Theroux begins his journey to the Southernmost tip of the American continent by observing a young woman reading one of his earlier books on a train.

Now, anyone who has ever written anything at all, in the hope it will be read by anyone, will understand what a mystifying experience that surely must have been – how very few things in the world are more engaging than actually watching a total stranger suck up the words you yourself put on that page.

It’s been a while since I have read the Old Patagonian Express, and I’m not all that sure if this reference is even accurate. But the idea is still that this is very much a fantasy I hope I will get to live out some day myself. And, so I have put myself at the  mercy of chance and need to be ready to spring into action the minute opportunity presents itself to turn it into a reality. Magic, the conductor of fate, needs to be put forth before it will come bouncing back, is the way I see it.

When certain requirements, conditions, are finally in place; only then can the Goddess come in and do what she does best: turn fantasy into reality;

– A book from one’s own hand needs to be making its way through the world.

– The author of said book needs to be traveling with said unsuspecting reader, who happens to  not have been tempted by any other masterpiece at the kiosk of the Gare du Nord and can furthermore, be bothered to read said author’s work.

– The author of said work needs to then be awake for a large portion of said train ride, even if it is after a long romantic weekend and said author’s eyelids are made ever so heavy by the sensuous rocking of the Thalys going supersonic between Charles du Gaulle and Bruxelles Midi.

But then, said author will remember that his book hasn’t been out long enough – and that a French translation of it, at this point, is a one fantasy that is still to make it out of the ranks of common lunacy.

Said author may chuckle to himself at this point, a little bitter, perhaps; though in no way bitter enough to dirty his gathering karma with cynical thoughts, of course, and he will remember that the Goddess is also fickle, as Goddesses tend to be. The Goddess needs tempting, the timid will bore her and she will walk right by, unless one tugs at her robe a bit to get her attention from time to time.

Directly next to me, on the other side of the isle, there is a man I take to be French, reading something that is beautifully bound – and thick! I take him to be French for no other reason than that he has a moustache stuck to his face and has not stopped chewing energy bars since leaving Paris. I get up and pretend to reach for my things to sneak a peek at it. English! 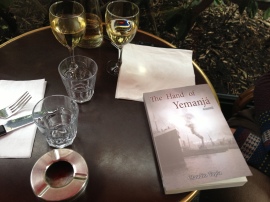 Now, this not only rules out him being a Frenchman, but also suggests he is tourist travelling alone, far from home and therefore keen to starting conversations with total strangers. And best of all, as a traveler, he will know about the Goddess for sure.

I tap the man on the shoulder. I introduce myself and explain my relationship with the Goddess. I learn he is Dutch, a man serving in the public sector, going home to Schiedam.

I grab my own copy of the book, the one out of my own hand… and offer it to him.

He looks at me like I am a complete maniac and is clearly fearing for his own safety. He reaches into his inside pocket of his blazer – for what I am hoping will not be a can of maze, but a pen.

It is the latter.

To my neighbor Maarten from the Thalys;

The Hand of Yemanja

I’ll be on a train again tomorrow.

Enjoy the read, Maarten! The Goddess is watching us both.