So, how does the Bantu Goddess of the sea, Yemanja, get to play a title role in the book? To answer that question I need to take you back to my biography.

On 9/11, 1973, democracy was hung by its feet and bled to death in Chile. Soon, an exodus got underway out of the clutches of fascism and among the thousands who felt threatened enough to leave everything behind were my parents, selling all but the bare necessities and taking their three young sons on a cruise bound for Genoa. No, really, a cruise, a boat; the idea being that it would be less conspicuous than – say, crossing the Andes on mule to Argentina.

Point is, even though, we passed through the Panama Canal, we too navigated over Neptune’s roof, like Lydia and Paxi and other characters in the book; over the lap of the Goddess and too were touched by it, The Atlantic.

And: so, what about Pierre Verger, with his the fleshy, moving work that captures so enticingly the Brazil of Condomble? Well, in the same way the Goddess comes to Edmilce in the book, by Pierre Verger’s hand came this: 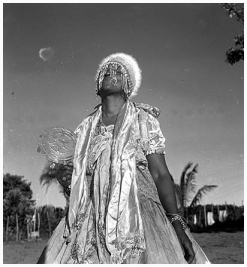 Which Anja Robertus laid over one of her own photos shot in Brazil, and for me and the book she made this:

Thank you, Anja, for your design and thank you Pierre Verger Foundation for the pic. Both contributions have been invaluable, given of course that it is with this image that the book begins to get visual, as it was still largely being written at the time. The marriage of Pierre Verger and Anja Robertus’ work is actually what put me on the path to Lit-Cinema, and if The Hand of Yemanja ever gets made into a movie, this will be the poster.